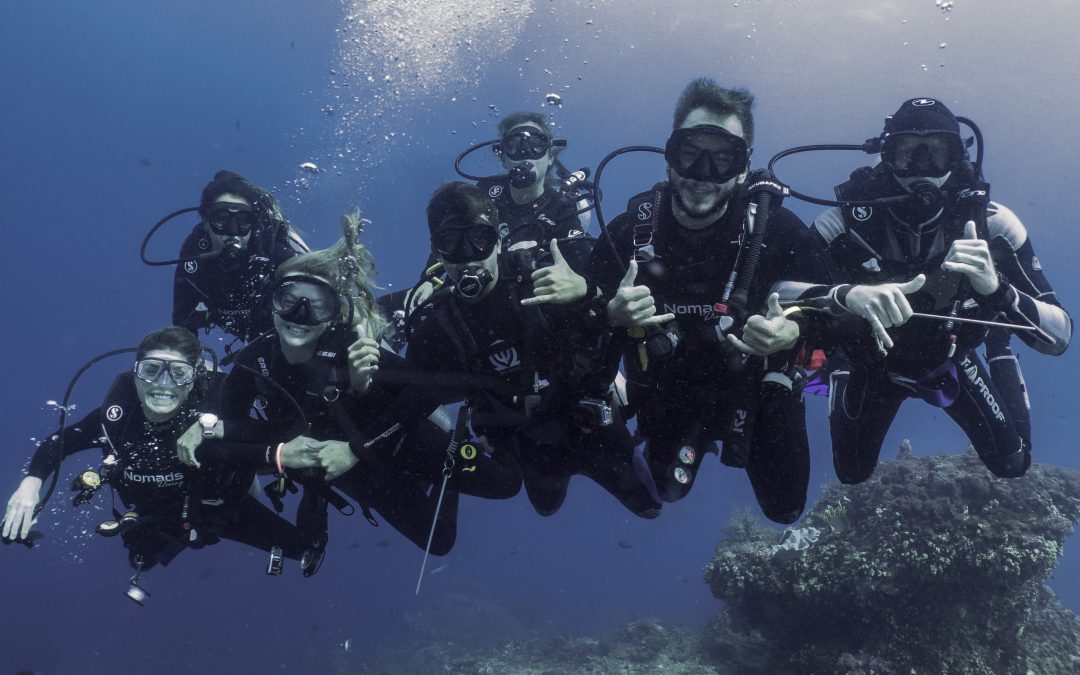 Stay up to date with the Indo Ocean Project team and follow along with our bimonthly update postings! Hear from staff Pascal and Serena on what has been going on the last few months….

I joined the most wonderful team and community here in Nusa Penida in mid November. A group who loves the ocean as much as me!

Indo Ocean Project and Nomads Diving is a place for real action for the protection of our precious marine life.

We have gathered scientific data around the dive sites using the Rover Diving Survey method. To date, 149 surveys have been conducted by our devoted staff and Divemaster interns since February 2018.

We have produced 16 BRUV’s since August 2018 with interesting results such as the appearance of a Grey Reef Shark, Brown Banded Bamboo Sharks, Marble Rays, Napoleon Wrasse and a cheeky eel that was stole our bait pole! We will continue to deploy more BRUV’s to monitor our marine species and locate target areas.

The data collected is exceptionally important as a base to any further action such as publishing scientific papers, community development programs and managing the marine protected areas. We have been analysing the data and seen some initial patterns here in Nusa Penida.

We have a presentation planned for February after 1 year of survey diving data collected to present some initial findings and trends to the community.

Since July, 12 Divemasters have been certified (2 under SSI and 10 under PADI) and we are proud to have sent these exceptional graduates into the professional diving world. So a huge congratulations to; Graeme, Harry, Ceara, Chloe, Taylor, Mariana, Dario, Ryan, Katrine, Simone, Olivia and Chris!

Three of our graduates, Anniina Haapalainen, Ceara Wallace ,and Mariana Vergara have already secured jobs in their native countries of Finland, New Zealand, and Mexico respectively and we know that they will have a huge impact on the diving world in years to come.

In 2018 we also certified 36 environmental specialty courses completed in Scientific Diver, Shark Ecology and Manta Ray Conservation as well as additional specialties such as the fantastically fun Deep Diving Specialty, completed by 10 of our graduates.

We have continued to develop our program and in 2019 will be offering a total of five specialties, adding in both Coral Reef Ecology and Sea Turtle Ecology to the program. This will increase the knowledge base of our interns so they can be true environmental ambassadors with a wealth of information that they can pass on to customers, whilst also being exceptional Divemasters.

Additionally 2018 has seen the launch of two new interest groups on Facebook that have already seen some overwhelming and surprising successes.

First came the Nudibranchs of Nusa Penida group which encourages people to hunt for the amazing and varied macro life that exists around Nusa Penida. Within two weeks of launch member Yanitza Grantcharska identifying what is thought to be a brand new species of Dermatobranchus, currently named Dermatobranchus sp. by the world experts in the field. The species will be added to the next editions of Nudibranchs and Sea Slugs Identification by Gosliner et al, and you can see Yana’s new species here – http://slugsite.us/bow2007/nudwk1074.htm?fbclid=IwAR3g5FBkNoXtmrGwiKGgRSELSOYd0IJoqX2hGDJ0tRUqYFkoUfsPOiVfdLI

Second is the brand new Nusa Penida Turtles group headed up by our marine biologist Pascal Sebastian and senior Divemaster Trainee Vera Janssen. The aim of the group is to collect photos of the turtles spotted in the area and use i3s Pattern Software to identify individuals so we can begin to track their movements over the long term.

Finally, in December we began the first of our monthly Conservation talks, open to all… It was kicked off by the incredible Dr. Liz Jinata of Sea Turtle Rehabilitation Centre – YKK Nusa Penida and was attended by many people from both within and outside the dive shop, this initiative is designed to get everyone involved and engaged with conservation issues on both a local and global level. The next talk will be on Wednesday 2nd January, 2019.

It has been an truly amazing year and I cannot express enough thanks to all those that have taken part, helped and excelled in this fantastic project.