Mangroves and Invertebrates Assessment in Bunaken 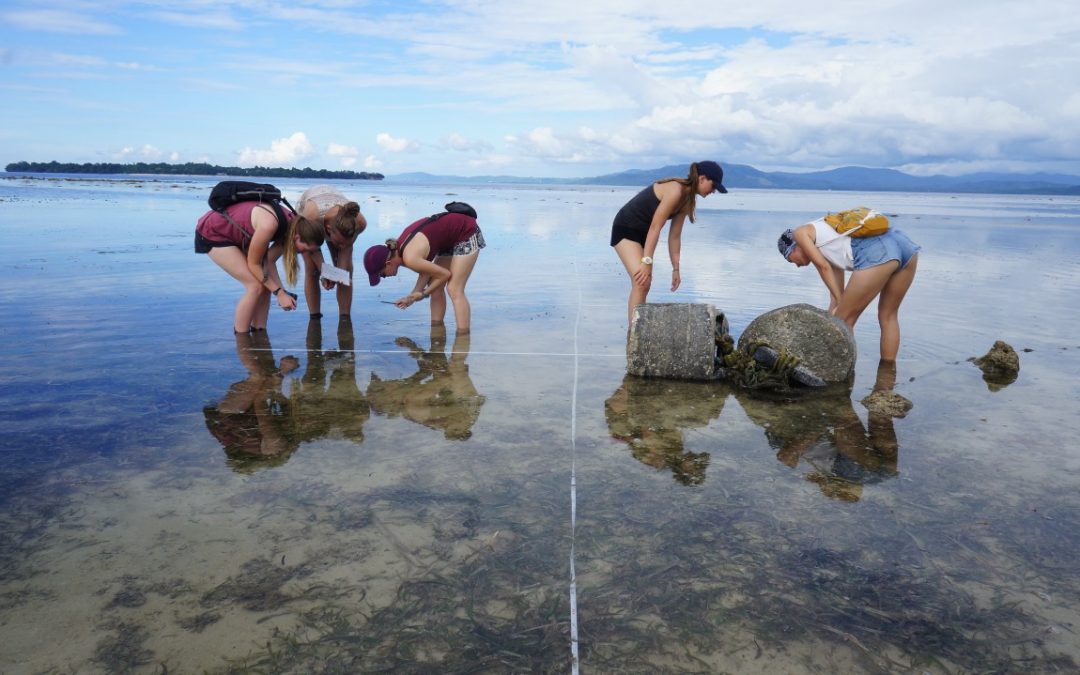 As part of the Indo Ocean Project’s Divemaster and Research Diver programme in Bunaken National Park, interns participated in the design and implementation of two studies, led by the Project’s marine biologist Pascal Sebastian, in order to learn how to conduct scientific experiments in the field. The activity took advantage of the Project’s privileged location to examine two critical tropical coastal ecosystems (mangrove forests and seagrass meadows), both of which are found in front of the beach where the Indo Ocean Project is based on Bunaken Island.

The first experiment aimed to estimate the carbon stock of the mangrove trees found around the island. There are around 351 hectares of mangrove forests in Bunaken National Park, which are among the most distinctive and unusual in Southeast Asia. Unfortunately, their existence is under serious threat due to human activity: during a ten year period from 1982 to 1993, for example, the mangrove area inside the Park reportedly decreased by 17.7%.

With the increasing concentration of carbon dioxide and other greenhouse gases in the Earth’s atmosphere as a result of human activity, specially the burning of fossil fuels, the importance of mangroves in the fight against global warming is crucial. Through photosynthesis, they are able to take carbon from the atmosphere and use it to produce their own food in order to grow, thus keeping it stocked as part of them. This is what is known as Blue Carbon: “the carbon stored in mangroves, tidal salt marshes, and seagrass meadows within the soil, the living biomass above ground (leaves, branches, stems), the living biomass below ground (roots), and the non-living biomass (litter and dead wood).”

Equipped with a transect line, a slate and a pencil, interns measured a 20x20m square plot, covering an area of 400m2, and measured the diameter at breast height of all Sonneratia alba trees, the dominant species found inside the plot. With this data in hand, they used a model allometric equation, wood density reference and carbon conversion factor for this specific species (taken from Howard et al. 2014) to estimate the trees’ biomass and the amount of carbon stored in them. The result was then extrapolated to estimate the carbon stock of the total area covered by mangroves in Bunaken Island (81 hectares, according to measurements made with Google Earth).

It is important to note that, for the purposes of this experiment, the team had to assume that all the mangrove forests found around the island of Bunaken are made up exclusively of trees of the same species and size as those found in our sampling area. Also, the model allometric equation, wood density reference and carbon conversion factor for S. Alba used may not be completely accurate for the trees found in Bunaken.

The second experiment examined the abundance and biodiversity of motile invertebrates found in the shallow lagoon between the mangrove forest and the coral reef, located just in front of the Indo Ocean Project’s base on Bunaken Island. The aim was to verify if there were any significant differences between an area that is used as a boat channel by a local resort (and thus regularly disturbed) and an undisturbed area, in order to test the hypothesis that the undisturbed site would have a larger biodiversity and abundance of motile invertebrates than the disturbed site. Because it was not feasible for interns to accurately measure the level of boat activity on both areas, they had to assume that the undisturbed site was 100% undisturbed, which is unlikely as boats may still travel over the area.

The experiment was conducted at low tide, when the sampling areas are shallow tidal water pools covered by seagrass. Interns laid out a 30m transect line at both sites, perpendicular to shore, starting where the coral reef begins and extending towards the beach. They used two bars of four meters length to mark 2x2m quadrats on both sides of the transect, covering a total area of 120m2 on each site. Then they recorded the species of all motile invertebrates found and the number of individuals of each species observed inside the quadrats. This included many horned and blue starfish, sea anemones and common sea urchins, among others. The substrate type was also recorded and a picture was taken of each quadrat.

With the data collected, interns were able to describe the abundance of each species found in the two sites and compare them using established formulas, such as the Shannon-Wienner diversity index, the Czekanowski coefficient and the equitability index. This allowed them to discuss if the differences found were likely to be caused by boat activity, or by other factors such as tides and habitat preference. In order to increase the reliability of both experiments, they should be repeated by future Indo Ocean Project interns at more locations around Bunaken Island in order to calculate average results.